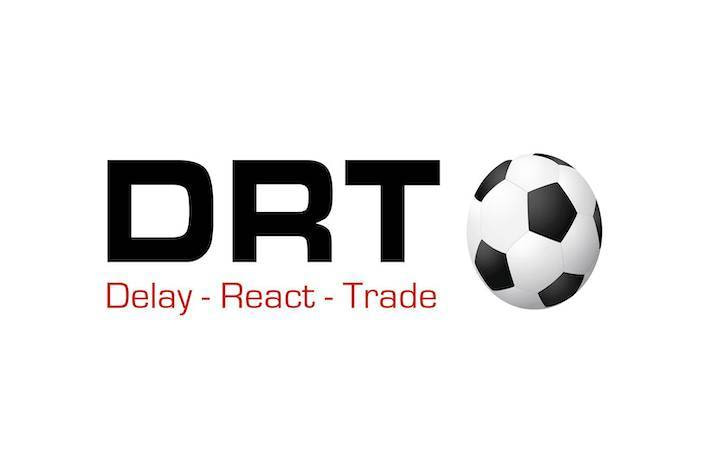 Delay React Trade is a football trading service from Clive Keeling that teaches you how to make money from in-play football matches.

It has been around for quite a while now and was originally reviewed here at Lay, Back and Get Rich by Lucy in 2015.

While the same concepts apply, the service has evolved a lot since then and they have recently opened the doors to a new programme called "The InPlay Football Academy". I figured it's the ideal time to take a fresh look and start a brand new review.

The academy is designed to give you everything you need to make a second income from football trading.

When you first sign up, there are a series of video guides to go through, followed by a PDF guide with everything you need to know about the Delay React Trade method.

The DRT method is based around hot favourites, but rather than backing them when they are at crazy low odds, the strategy is to delay until something unexpected happens and get better odds.

It is all explained in more detail in the strategy guide, but the gist is to delay entering a trade and react when something happens, then trade out when appropriate.

One of the main parts to the service is the Telegram group and the live webinar sessions, where you can see exactly how Clive trades the matches and either paper trade or follow along with real money when you are ready.

There is also access to a private Facebook community of DRT members and Clive also posts previews of matches there.

Clive spends a lot of time researching matches and provides a daily bulletin with stats for some of the top matches of the day.

As much as I like trialling tipping services, it's always good to look at something different and I being a big fan of football trading, I am really looking forward to trying DRT out.

The thing about trialling a trading service is that results are going to be different for everyone, especially for DRT.

The advice is there for you to make use of but not everyone will be making the exact same moves as it depends on your personal trading style.

While there are guidelines to follow, everyone has different comfort levels when it comes to risk.

Although I won't be providing sets of results for the service, I have put together an example of a night of trading so that you can get an idea of what the service is about.

I managed to achieve a 10.85% increase to my trading bank from 3 daily bulletin trades and 1 Telegram alert. Not too shabby, hey?!

My first step was to read through the PDF manual and then have a go at implementing the strategy on some of the matches covered in the daily bulletin.

It was a positive experience and I felt in control knowing I had the stats behind me. I have noted my trades down in a diary, showing how I used the bulletin to decide what matches to get involved with.

This was my first time trading with DRT and it was a little daunting as I was flying solo with no Telegram alerts on this particular night.

The money management advice said that a 20 point bank was adequate for the service, so I had put aside £200 to test it out. That meant 1 point would be £10 for me.

My first step was to check the “Daily Research Bulletin” and save the matches that I was interested in to Flashscore.

I traded 3 matches during the whole night but I am pleased that I was selective, as they all turned out to be winning trades.

Below is the research provided on DRT, followed by my results.

NAC Breda scored at 55 minutes and I quickly traded out and left all of the profit on the Over 1.5. This meant that I still needed another goal to make a profit but I wouldn’t lose anything if the 2nd goal didn’t come.

It came quicker than I thought with Roda scoring in the 57th minute.

That was the first trade done and dusted and £7.18 profit.

I didn’t back the 0-0 pre-match as I felt like I would be panicking, not knowing when to trade out in case a goal came!

Instead, I waited until half-time again and placed a lay on Under 0.5 Goals at 3.40 (the same as laying 0-0, but I like that the Over/Under Goals markets settle right after a goal).

This match was 2-2 at half-time and I decided to lay the draw this time.

Marseille went on a scoring spree, finishing the game 5-2. I had played it safe and greened up for an equal profit across all outcomes at 3-2.

This gave me another £2.79 profit and that was me done for the night.

Following the strategy of delaying trades until later in the match was working well and I felt in control, knowing exactly what I was going to do whatever happened.

I couldn’t make it to the DRT Zoom session on this particular weekend, but I did catch a Telegram alert that prompted me to make a quick trade.

When PAOK equalised the Home or Draw odds dropped to 1.11, so I greened up to make it £10.13 profit across all outcomes.

Of course, this meant the Over 1.5 Goals lay had lost, so subtracting that gave me £7.63 profit.

It took me a while to find the time to fit one of these webinars in, hence the delay on this review. Sorry!

These Zoom sessions mainly take place on a Saturday and Sunday but it depends on the match schedule. I managed to attend on a Saturday on a day where there was plenty of activity.

For me personally, I find that pre-planning the trades that I want to get involved with is the most useful. It can be easy to get carried away with live trading chats and webinars as there are often a lot of opportunities and it is tempting to jump in without thinking things over.

With that in mind, I decided not to actually do any trading but sit back and watch the action unfold.

Clive started by going through the fixture list and marking all the hot favourites to keep an eye on in-play.

As time went on, a number of opportunities came up and Clive often used a strategy of backing the team either in the match odds or handicap markets and then adding some insurance in the goals markets.

There was also a chat box where participants could add their thoughts on certain matches.

One that stood out for me was one chap that had spotted that QPR's goalkeeper had been injured in the warm up and with their backup keepers out of action, they would have to field Murphy Mahoney, who had never played for the QPR senior team before.

This little snippet of information turned out to be a golden nugget and presented a fantastic trading opportunity with Preston going 2 goals up.

I definitely think these webinars are useful to see how the strategy works in real time, but I think sitting back and watching is a good way to start. The staking can take time to figure out, as there isn't a set staking plan in the webinars and Clive says it can be on an ad-hoc basis based on confidence and in-play stats.

Paper trading is the way to go and built up confidence in the strategy before going in with real money.

A lot of work goes into the Delay React Trade service. It's not just a trading strategy, it is a complete package with live trading and on-going support.

I feel confident that if I continue to follow the advice from the daily bulletin, I can make a profit from the service in the long-term.

The webinar is an added bonus, but personally I probably wouldn't have the time to attend on a regular basis. That is the cool thing though, as there is much more to the service that I can fit in around my schedule.

Whether I just plan my trades with the daily research bulletin, follow the Telegram alerts or fit in a webinar, there's plenty of methods available.

The key is not to get carried away, be careful with staking and stick to the strategy!