Time has flown by since I started my 1-2-3 System review, it’s been almost six months and I still haven’t hit my 200 bet target!

In my first update I was heading towards losing 50% of my bank and things weren’t looking good.

So have things improved during the past few months?

Sadly not, although things haven’t really got much worse either. I have lost a further £17.34, which brings my overall total loss up to £418.96.

Here you can see my figures for the second period of my trial, which spans from November ’17 to April 2018.

And here are the overall statistics for my whole trial: 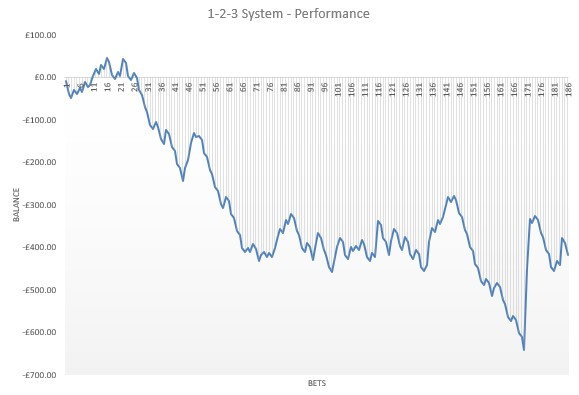 There have been quite a few gaps in-between betting days and there was a time where I didn’t hear from the service for more than a week. What was also quite frustrating was some days there would be an email to say that it was a “no bet day” but sometimes there would be no email at all, so I was kind of left hanging.

I’m quite suprised that this service is still around after giving a poor performance for quite some time now. It’s hard not to lose confidence in a tipster after a long drought such as this, but it seems that PuntHub are still hanging on in hope that things turn around.

This one is not for me though and it will be going firmly into the failed pile.

Hey everyone, it’s Amy here and I thought I’d give you a quick update on how I’m getting on with 1-2-3 Racing since taking over Lucy’s trial last month.

I have taken a look at the results sheet at PuntHub and was pleased to see a reported profit of 43.76 points from when Lucy posted her introduction up until when I started recording tips on 10th October.

Unfortunately since I came into the frame things have gone pear-shaped!

So far I have been rapidly losing money from both the win and place bets and at this stage I am not certain my £1000 test bank going to be big enough. I will carry on recording results until I’ve hit 200 bets and hopefully report back with some better news in my next update.

In the meantime, if you’d like to find out more about 1-2-3 System, you can do so here.

If there’s one thing I’ve learned about the readers of my site, it’s that they are a no-nonsense lot.

They want transparent, easy-to-use services which are good value and, crucially, make money.

Not much to ask, you might think, but there really haven’t been too many over the last six years that have fit the bill.

And when it comes to horse racing, there is always one stand-out requirement…

Does it work at Betfair SP?

Well, I’m pleased to say I’ve found that one that claims to do precisely that.

1-2-3 Racing is that rarest of things, a service that encourages you to bet at Betfair SP.

Which means, for the uninitiated…

It follows that every punter who uses this service should exactly the same results, irrespective of whether he or she enters their bets five minutes – or five hours – before the off.

The claimed performance level is not sensational – but it is certainly quite satisfactory.

Over the last six months, PuntHub, the service provider, advise that the ROI has averaged out at around 8%:

I would be more than happy if we were to achieve the same level of profit in my upcoming trial.

It’s hard to think of a more straightforward service than 1-2-3 Racing. I’m therefore quite excited at the idea that it might actually work.

The only slightly unusual aspect is the staking plan, which involves putting on a single point bet in the win market and a 3 point wager on the same selection in the place.

Personally, I’d prefer single point level stakes on both markets but no matter. We can compare likely outcomes for different approaches as we proceed.

I’ll aim at 200 bets to start with and return with my first progress report in early July.

In the meantime, if you’d like to find out more about this easy-to-use product, you can do so here.