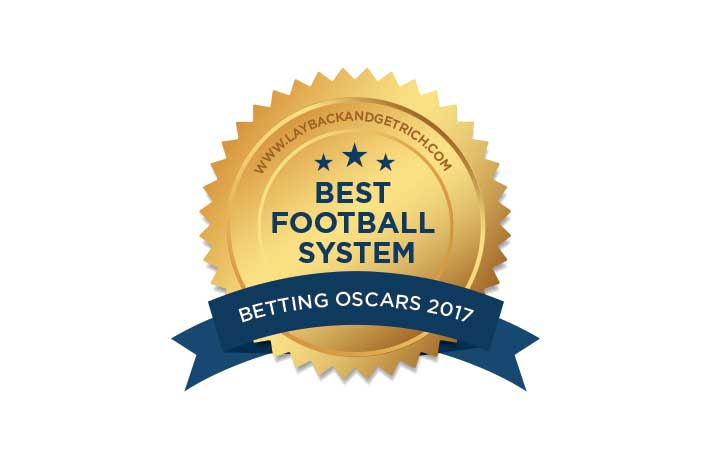 Welcome back to the 2017 awards ceremony!

When announcing the winner last year, Lucy revealed that “Goal Profits won more than three times as many votes as anything else” even though there was a lot more competition from new products.

That was an impressive feat and led to Goal Profits surging to the top of the Oscar-winning table with more wins than any other system or service.

So… what happened this year?

Did the football system you voted for end up as the winner?

I’m excited to announce that the winner is…

I don’t know what happened to the other football betting/trading competitors, but Goal Profits was way ahead within days of opening the voting and never looked like being caught.

In fact, no other football service won more than two votes! Really quite amazing.

The first thing I did was get access to Goal Profits itself so that I could update the various trials and reports at Lay Back (including plenty of screenshots).

Steve said, “Thank you to everyone who voted for Goal Profits! It’s our third time winning this award and it’s a huge motivation for us to do even better. We want to keep winning, so we push ourselves to constantly improve our amazing football trading community for all members, old and new.“

“We’ve welcomed a growing number of new members over the past year whose bookie accounts have been gubbed through matched betting. Thankfully, most are joining before they lose all of their income so that they have some time to learn trading without any immediate pressure.“

He continued, “We are also celebrating more members than ever who are able to trade full-time. Of course, most don’t suddenly give up work and expect to pay their bills from trading! Just this week I received an email from a member who has steadily learned football trading over the past 16 months and expects Goal Profits to provide more than half his total income in the near future. That’s a great way to steadily build.“

“The improvements to the Goal Profits Members Area have continued and I’d like to thank you, Amy, for taking the time to update the site here with many of our latest additions. We’ve moved on a long way from even the last trial, so it was good to get it up to date. We still have plenty more ideas to implement too, so there’s a lot more to come yet.“

“If any Lay Back & Get Rich readers have not joined us yet, we would love to welcome you on board and help you achieve all of your trading goals.“

Thank you Steve and congratulations again! The margin of victory really was impressive and fully deserved from what I have seen inside the members area and chat room.

So… if you have not checked out Goal Profits yet, try it for a week for £1.

You will get immediate access to everything you need to start trading, but you’re not tied in to anything long-term. Remain a member if you want to, or don’t – though I don’t know why anyone wouldn’t, I have really enjoyed my peak behind the scenes!

The next Betting System Oscar to be awarded will be for “Best (Other Sport) System” so stay tuned!