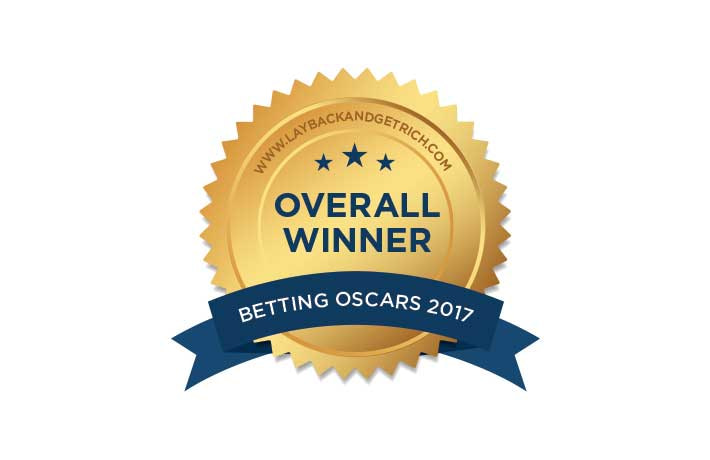 Welcome to the grand finale of the 2017 Betting System Oscar awards ceremony!

Today, I’m handing out the big one… “Overall Winner”.

Rather than simply adding up all the votes cast so far and awarding this Oscar to the most popular category winner, I specifically asked everyone,

“What is your overall favourite commercially available betting product or service?“

Lucy always did the same and I too wanted to ask Lay Back readers to vote for the very best.

And I’m almost ready to reveal the Overall Winner for 2017!

Firstly though, a quick look back into the history books.

The Betting System Oscars started way back in 2012 with a win for Tradeshark Tennis, then Pre-Match Trading picked up the spoils a year later in 2013.

Football trading provided the winner again in 2014 as Goal Profits triumphed, landing the double in 2015 with another win.

The hat-trick (rather apt for a football service) was completed in 2016 as Goal Profits took top spot for the third year in a row.

Personally, I am surprised that tennis and football have been leading the way every year so far without a sniff of horse racing or the ever popular matched betting.

Did the product you voted for end up as the winner?

I’m excited to announce that the winner is…

Amazingly, Goal Profits has won for a 4th year in a row (and it wasn’t even close).

Having scooped more than 40% of the total votes, Goal Profits was way ahead of the second place product which collected a rather paltry 4 votes.

The likes of OddsMonkey and Fairbot attracted lots of votes in their own categories, but when it came to the overall best of the best it became clear that a huge majority of Lay Back readers rate Goal Profits very highly.

I have spent a lot of time in the members area over the past couple of months, learned a lot and I completely understand why it enjoys so much success, but I am surprised that there are no other products out there which have much of a fanbase. Matched betting especially, since it’s so popular.

When announcing the winner last year, Lucy wrote, “Goal Profits, without a shadow of a doubt in my mind, has shown every other service out there how it should be done” and it seems that they are still leading the way.

When I emailed Steve Brown to break the news, he was delighted!

Steve said, “Thank you so much to readers of Lay Back & Get Rich for voting us #1 again!“

“We’ve come a long, long way since starting out in 2011 and member numbers continue to rise each and every year. Some have been with us since the very first day six years ago and a number have become friends, through trading together in the chat room and at our free trading events around the country.“

I have to say that I have enjoyed my time in the chat room. There are lots of people asking/answering questions and helping each other out. It’s a nice, friendly atmosphere.

Steve continued, “Getting so many votes is absolutely fantastic and proves that all the new tools we’re adding to Goal Profits are a hit! We wouldn’t have been able to do it without the neverending support of our members, so thank you all!“

“When Lucy emailed last year to tell me that we had won for the third time she wrote, “frankly, it’s getting repetitive but I’m still pleased for you!”. It goes without saying that Kevin and I are huge fans of this sort of repetition and we soon got to work on yet more improvements to the Members Area so that we’d be in with an even better chance of winning this time around.“

Repetitive! Hear that, competition? Let’s get someone to challenge next year!

“As we develop Team Stats, it’s taking on more and more of the work and allowing members to research trades quicker and easier than ever before.“

“The latest addition (due to go live within the next week) allows members to have a conversation with Team Stats. For example, “show me upcoming fixtures in which the home team has won the first half more than 60% of the time this season”.“

“Lots more conditions can be added too, perhaps overs/unders, BTS, goal times, teams which score first and so on. There are quite literally hundreds and thousands of combinations which members can decide upon, then Team Stats will show a complete list of qualifying fixtures up to a week ahead (including full stats).“

“It saves the conversation too, so an updated list of fixtures can be built within seconds every single day.“

“Once this tool has been completed, we will be starting work on a brand new in-play trading tool. This will save a huge amount time in-play (when it’s already in short supply) and leave a lot more time for actually trading.“

“So thank you all again; Lay Back & Get Rich readers, Goal Profits members, Amy and Lucy.“

And thank you too Steve! As I said above, I had expected this to be a closer race with at least one other service or system collecting a decent number of votes, but congratulations to you and Kevin.

Get immediate access to everything you need to start trading, including help and support from Steve and Kevin whenever you need it. You will also get access to Team Stats, chat room, trading strategies and the new tool which Steve mentions above.

That’s it for the 2017 Betting System Oscar awards ceremony. Congratulations to the winners and to everyone else, you have a year before we do it all again!