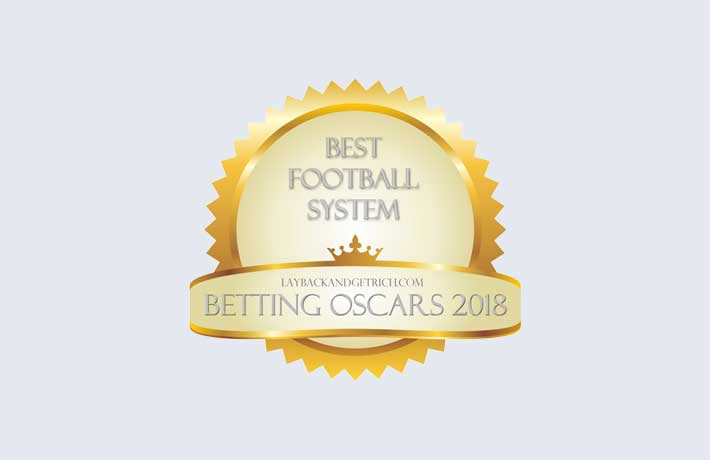 Welcome back to the 2018 Betting System Oscar awards!

Betting System Oscars are presented to the systems, services, tipsters and software that you vote to be the very best. I received a huge number of votes this year, more than two and a half times the number received in 2017!

That gives me a lot of confidence that the winners are fully deserving of their crown. After all, there can be no better gauge than the recommendations of paying customers.

That leads me on to the award for "Best Football System".

Goal Profits did it again in 2017 too, blowing the competition away.

Well yes it is... the winner of the Betting Systems Oscar for "Best Football System" is...

It's quite astounding really, 83% of the votes went to Goal Profits and no other system or service received more than 3 votes. At least that was one more vote more than the 2 last year, but still nothing comes close to challenging the Goal Profits guys.

When I informed Steve of his latest win, he was delighted!

"Thank you so much! I look forward to this time of year and the reassurance that we've improved our service enough to stay ahead of any competition."

Well Steve, you certainly did that and then some!

"It's been a spectacular year as we finally unveiled our Live Stats Module; an in-play stats tool which we've been working on behind the scenes for almost four years. We gathered plenty of feedback from members who had used various stats sites and tools in order to find out what wasn't working, then we set about making our tool much better. We're delighted with what we have achieved and that we're able to offer it to our members so cheaply."

He continued, "There have been plenty of other new features added to our Members Area too and we have had to upgrade our server to cope with it all. The Team Stats database and analysis tools were getting too big and far too complex for our old server to handle - and it was the most powerful machine we could find at the time!"

"We have plenty more features to come over the coming months (now that the battered old server is gone) and members will receive all of them for free as part of their current membership. We're gunning for that 2019 Oscar already!"

I remember not so long ago when most betting systems were a hastily put together PDF which promised the earth (and delivered little). It's great to see that the industry has moved on such a long way and that services such as Goal Profits are constantly improving.

Having collected so many votes, Goal Profits is an obvious and worthy winner. Congratulations!

Get access to all the tools that Steve mentioned for a week for just £1!

Try them out and if you love them stay on, otherwise cancel your subscription and walk away without a penny more to pay. It's pretty much free given how little £1 buys you these days, not even a cup of coffee!

See for yourself why Goal Profits wins so many votes from LB&GR readers year after year.