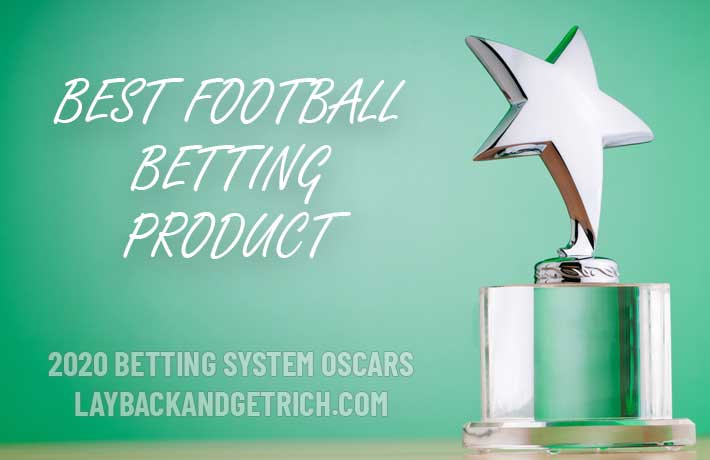 Welcome back to the 2020 Betting System Oscar awards!

These awards are voted for by Lay Back & Get Rich readers each year and with more votes now than ever, the competition is fierce!

The idea was to give football tipsters a fairer chance of winning an award.

Unfortunately, I have not been able to determine a winner for the tipster award yet because Goal Profits ran away with it again, despite not being a tipster service! After disqualifying all their votes, nothing else stood out.

Goal Profits have won the "Best Football Betting System" award 5 times since 2014, but the voting starts again from zero every year and there's every chance of another service challenging Goal Profits... isn't there?

Apparently not, as they have only gone and won it again!

Goal Profits has picked up their 6th win and their 12th Betting System Oscar overall!

It's quite astonishing really that one service can dominate for so many years. Goal Profits picked up 79.4% of the votes, leaving other products trailing behind.

I'm sure that Steve has started to expect an email around this time of year congratulating him and Kevin on another win, but he doesn't appear to be any less excited!

"Thanks very much to you, Amy, and all your readers!

2020 has been a real challenge, so to receive an award this year is particularly uplifting. It was a bit scary when the lockdown hit and we were left with very little football. We immediately gave all our members a few months of free membership to take any financial pressure off and that was very much appreciated by all.

During lockdown, we had a lot of extra time on our hands so we set about developing new research and trading tools. One of our new additions, the Team Stats Database, analyses 216,702 historical fixtures and that number grows daily. It's fantastic! For example, it tells us how many games which were 0-1 after 75 minutes had another goal scored, how many ended in a draw and so on. We're able to add many more conditions too, such as the home team being in the top third of the table or the home team having scored in at least 75% of their home games during the current season. There are hundreds of combinations and the calculations are carried out in seconds.

We also added another new feature to our Live Stats Module last week called 'Projections'. This calculates the percentage likelihood of a home win, draw, away win, over and under 2.5 goals. The real magic though is that the Projections are updated inplay every minute so that they update according to time decay and goals scored.

It saved some money for members at the weekend when Real Madrid were 0-1 down at home to Cadiz. Projections showed that at 0-1 after 66 minutes and between similar strength teams, 67% went on to end in away wins which was exactly what happened. There was only a 17% chance of the home win and a 16% chance of a draw, so the prices of 5.00 and 2.90 looked far too short and members stayed out. Avoiding that loss was as good as a win!

Unfortunately, we haven't been able to run any of our free trading workshops this year because of the ongoing pandemic. We will get back to all that as soon as we can, but for now we have plenty more ideas to work on which will make Goal Profits membership even better value.

Thank you again to everyone who voted for us and stay safe!"

Congratulations again Steve! I know from my own experience of Goal Profits that there is a lot happening in the Membership Area. There are strategies, statistics, live chats, forum, the Launchpad course and it goes on.

I really do recommend that you spend £1 and take a look for yourself.