AH Horse Racing has done it again and delivered yet another profit to make it 3 out of 3 winning months!

The service even managed to make a profit at Betfair SP, racking up a total of £217.98. It’s quite a way under the profit achieved at the regular bookies, but could still be a viable alternative for those that prefer to use Betfair.

What an absolute delight it has been to carry out this trial. I’ve found it easy to follow the service, as there are usually only 1 or 2 tips per day. They are emailed out in the evening or occasionally in the morning and there is also an email to say if it is a “no tip day”.

Along with each tip, there is a short summary of why the horse has been selected, as well as the advised odds and what bookmaker they are available at. I found that I was able to find the same odds most of the time and only finished just under £20 short of the profit recorded at the advised odds.

Here are my results for month three, followed by statistics for the trial overall:

My full results log is available to view here. 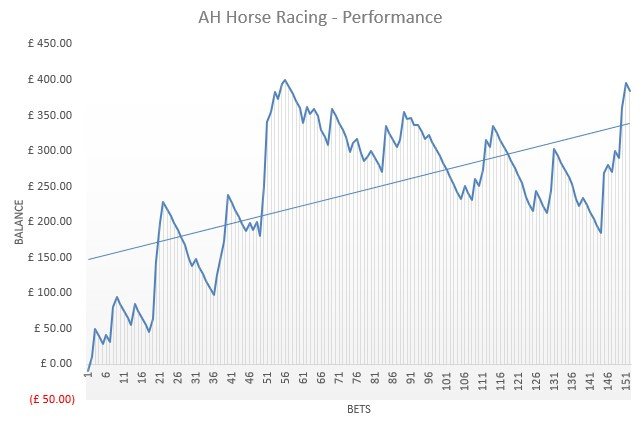 I have been impressed by how consistent this service has turned out to be, making a steady amount of profit each month.

Also, here is a tipster who clearly appreciates his customers. Members were recently asked for feedback to see whether they prefer more selective tips rather than a higher volume. How cool is that? The overwhelming vote was for quality over quantity, which is certainly what I would prefer from a tipping service too.

AH Horse Racing is fully deserving of a pass rating and gets an easy recommendation from me.

The incredible winning run for AH Horse Racing is still going, making it 2 out of 2 profitable months in my trial.

Going by the website results, the service hasn’t had a losing month since last August… that’s some achievement!

The tipster had a fantastic return from the Cheltenham festival, netting £128.20 profit from just under £500 worth of bets, working out as a 26% ROI.

I’ve also been impressed to see the tips do so well at Betfair SP prices. The profit isn’t too far behind the available prices, which are usually recorded the evening before the races.

The full results so far are available to view here.

It’s been another successful month for AH Racing thanks to some great tipping over Cheltenham. I do hope to see this winning streak continue, surely it can’t keep on forever, or can it?

Check back next month for my latest findings and in the meantime, you can find out more about AH Racing here.

AH Horse Racing have delivered another profitable month which now makes it six in a row based on the reported results.

I have to say, it’s been quite refreshing to see a service perform so well while recording wins and losses at prices which have been readily available. So many tipsters these days send out emails with prices that are simply not achievable and it infuriates me!

I’ve been tracking the available prices and have recorded a profit of 11.4 points over the past month, which isn’t far behind the 12 points profit at the odds advised. That’s a big tick in my book.

The service achieved a commendable ROI of 31.7% this month and although I don’t expect it to be this high all of the time, the tipster has achieved an ROI in excess of 20% every month for the past five months.

Everything is going swimmingly for AH Racing so far and hopefully I’ll be able to report back with more of the same in my next update.

I’ll be back with some more results in a month’s time, but in the meantime click here to find out more about AH Racing.

AH Horse Racing is the latest tipster to be accepted to PuntHub’s “Successful Candidates”, after achieving a profit in 4 out of 5 months during proofing.

At the end of January he made it five profitable months in a row with an average monthly gain of 4 points.

His first month of proofing was a disaster, with 143 points staked and a loss of 41.73 points. However, he vowed to turn it around and that he did. Since then, the amount he has staked each month has gradually been reduced and now averages at around 50-60 points per month.

Being more selective seems to have paid off, as his average profit over the last four months is now just over 15 points per month.

The tipster has agreed to offer his tips exclusively to PuntHub and is giving members a discount for the first month at £10, down from the usual price of £25 per month or £60 per quarter.

PuntHub have been very enthusiastic about the service, describing it with three main qualities – determination, ability and consistency, which are certainly great qualities for any tipster to have.

I want to see for myself, so I will be following the service over the next few months or until I reach around 200 bets.

The staking looks to be simple enough, with most bets advised as 1 point win or 0.5 points each-way.

I’ll return with an update of my progress in March, but in the meantime you can find out more about AH Horse Racing here.