Do Each-Way Doubles Offer The Road To Riches? 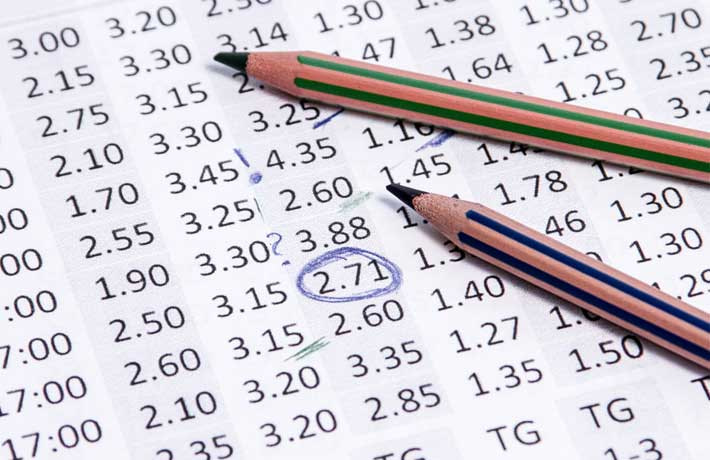 Maybe it’s just coincidence, but I seem to have received a whole pile of emails in the last few days about each-way doubles.

They vary in the detail, but broadly they’re all asking whether each-way doubles offer a low-risk route to more of this stuff.

So what’s an each way double anyway, and is it any good?

Wander into your average bookmaker shop (not something I feel particularly comfortable doing if I’m honest – thank heaven for online betting!), and you are very unlikely to see advertisements for each-way doubles.

Which does rather make you think….

Instead, daft accumulators, with exotic names like Goliaths and Union Jacks, will be everywhere. Improbable winnings projections will be prominently displayed, and perhaps even augmented by bonus payouts for the bigger accumulators.

….The reason being that accumulators make the bookies a lot of money, by compounding the overrounds in their favour.

So… given that your average bookie is probably unwilling to tell the average Jane (or Jack) about each way doubles, maybe this should make us ponder.

Now, like many things to do with betting, the answer is ‘well, yes, kinda’, though much depends on race selection. But they can be a good way of betting on two horses when you think both have a strong chance of at least finishing in the places.

Consider for instance two handicap races, each with at least twelve runners. In both cases, the bookies will be paying out 1/4 odds on place finishes on each of the first 3 positions.

Suppose we have placed an each-way double on Lucky Ned at 3-1 in the first race, and Honest Bob at 5-2 in the second.

Instinctively, you might suppose that these prices are too short for each-way betting, and I’m sure you wouldn’t be alone in thinking so. Most punters reserve each-way bets for long shots that they think may make an impression but have little chance of winning.

However, let’s stay with my example, and imagine both our selections finish in the places, but neither wins.

Now, an each-way double is really two separate doubles… One on both selections to win, and the other on both to place.

Assuming we have placed a £10 each-way double (effectively two doubles of £10 each for a total outlay of £20), the £10 win bet stake will be lost (as both horses needed to win for the win double to come up, and neither did), but the £10 place double would return £28.44, calculated thus:

This may seem like a ‘too good to be true’ outcome, but it does have its downside. The biggest one being that if either horse should be unplaced, we are sure to lose our entire stake – even if our other selection comes home in front.

One winner and one place would also only pay out on the place double, and probably leave you with a strong sense of ‘so near, and yet so very far’.

Because the fact is that each way doubles really come into their own when both your bets win.

So, in my view, each way doubles are really best regarded as an elaborate form of win double for fancied horses, with place market insurance to cover your stakes in the event that your selections don’t quite deliver.

Will the bookies close you down ?

If you do a lot of each way doubles, there is a definite risk of account closure. Especially of course if you keep winning! Bookies love mug punters, not mathematically astute players, and each way doubles do rather flag you as the latter.

However there is nothing to stop you emulating an each way double at the exchange.

Simply put on win and place bets on two short-priced horses in different races, carrying forward any returns from the first to the second, and you will create the same effect… And quite possibly benefit from better pricing too.

Each-way doubles appeal in races containing a small number of serious contenders. For instance, where there are three places and three short-priced selections, and a big price gap to the fourth favourite, you may be looking at a suitable race.

You should work out all the sums before you place your bets, using my free, completely unwarrantied(!) calculation spreadsheet. Check that, if only the place double comes up, your combined stake will be returned as a minimum.

For instance, Skybet regularly offer 1/4 place fractions on non-handicaps, instead of the mandatory 1/5. You can check the place fraction and number of positions that will apply by looking at the foot of each bookmaker column on the race cards at OddsChecker.

ps why not instantly download my free  now FORTY-THREE PAGE ebook on making £1000 per month from betting systems?  The methods are all low-risk and re-usable, so click here and get it now!