It’s been three months since I began my trial of Eddie’s Early Bird from PuntHub.

Things seem to have gone from bad to worse with month three ending with a bigger loss than the previous two months combined.

I am a little below my 200 bet target at 165 bets, but I’m not sure there’s much point in me continuing with the trial at this stage. Half my bank has been wiped out and it just feels like it will be too much of a climb now to get back to where I started.

Here are my totals for the whole trial and on a (sort of) positive note, I expected the Betfair SP results to be worse since the tips were mostly sent out the evening before, giving plenty of time for odds to shorten.

The performance graph for this trial says it all really. 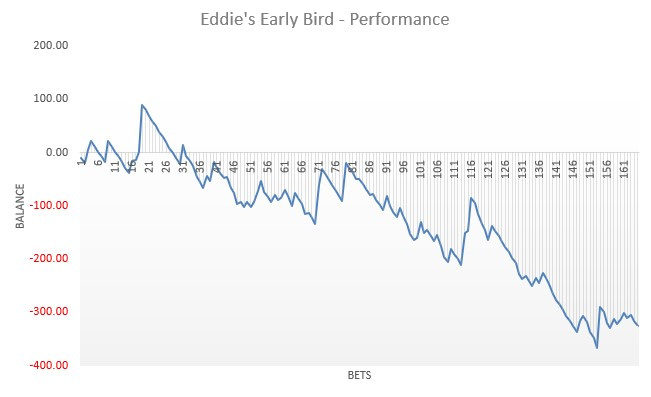 There were points where I thought the service may be on the road to recovery but my hopes were quickly dashed and it was back on to the downward spiral again.

Unfortunately for Eddie, this one has to go into the failed folder.

You can find out more about Eddie’s Early Bird here if you really want to.

Otherwise, click here to read about some trials which resulted in a pass!

It’s hard not to be disappointed in Eddie’s Early Bird after failing to make a profit in both months of my trial so far.

The service hasn’t performed well at BSP either, with a total loss of £209.74 overall.

The results posted to the sales page show that the service hasn’t had a profitable month since October and I would imagine subscribers to the service would be starting to lose patience at this stage.

I am willing to keep going for one more month to see if Eddie can pull things back, but it really is make or break for this tipster now.

I’ll be back soon with my final report.

When I started my trial of Eddie’s Early Bird last month, the service had been on a bit of a bad run.

It hadn’t made a profit during the previous two months, but I was willing to look past that as the overall results were good and Eddie was well on his way to doubling his starting bank.

So have things picked up since then?

Three months without any profit is quite worrying and I would expect to see much more consistent results, considering many of the selections are priced at 4/1 or less.

I will carry on following the service for another month in hope that this is just a blip.

The great thing about having a betting portfolio is if one tipping service is doing really well, it can cover the losses from those doing not so well.

After I posted the latest update to my review of 1-2-3 Racing, Ben the service provider from PuntHub contacted me and pointed out that one of their other tipsters was in great form at the moment and perhaps I’d like to start a trial and see for myself.

Introducing Eddie’s Early Bird – a simple horse racing tips service that sends out a couple of bets either in the evening or early morning each day.

There’s no complicated staking plans; all bets are either 1 point win or 1 point each-way.

I’m always cautious with new services as to whether they have just been lucky during their proofing period and whether they can actually achieve the same results in the long-term.

I will however go into this with a positive mind, afterall the service has almost doubled the advised 60 point bank already. That’s some achievement!

I’m going to aim for a minimum of 200 bets for this trial and I’ll be back with my first update in around a month’s time.