Hi everyone, it’s Keith here and it’s now been 5 weeks since I started the review of Magic Soccer Bot and so it’s time for some thoughts on it.

In my introduction I mentioned how I had some concerns about how the bot worked with its recovery system and so was I right to worry or has it changed my mind?

Sadly it’s done nothing but confirm my concerns and in fact made them worse.

To recap the bot places bets on the football correct score market. It then uses a system of recovery which spreads any loss over a number of future matches through individual tabs.

It allows you to run up to three strategies, either your own or suggested by the vendors, and I followed the three that were the most profitable ones according to the official website prior to the review starting.

Total of all three strategies over month 1:

Remember we are placing lay bets on the favourite correct score according to the Betfair odds before kick off. This means the majority of our bets are on the 1 – 1 score, 311 out of our 399 total bets, as the 1 – 0 score is a no bet on all strategies and all matches where 1 – 0 is the fav are ignored.

If there is a loss then it is split and allocated equally to the 10 individual tabs for future matches, each tab maintaining it’s own stake position for each strategy. If these future matches are all winning bets then all is well in typical martingale style, if any are not, and we are dealing with selections with an average lay odds over the review period of 7.52, then we have trouble as the stake starts to build up, again in typical martingale style.

If you only lose on the tabs/matches with base stake and win on the matches with increased stake you will be fine but if it’s the tabs/matches that have a higher stake on them that lose you won’t be and this is where pure pot luck comes in. You will have losing bets as there is practically zero match selection criteria, simply amount of money matched, gap between back and lay odds so that at least there is a formed market, and the actual favourite score in the odds.

Put simply after one months use all I can see is an mathematical exercise in rebranding and extending the life of a simple martingale strategy before the inevitable blow up.

Prior to the review starting the official web site had results figures of:

Strangely there have been no updates on the figures since 28th Jan.

It is claimed on the official website that a level stake approach can also work albeit with a reduced profit, something you would expect from a reduced risk.

Although I haven’t run the bot in this manner it’s easy to extrapolate the figures from the bet list for each strategy. Again these figures are based on attempting a £0.10 profit per bet. ( number of bets is the same as per the recovery method of course )

Total of all three strategies over month 1

Maybe I’m missing something somewhere. One of the user comments on the MSB web site says “your method of selection along with the staking plan is brilliant”. I can’t actually see a selection method, simply a high enough profile match to have a minimum amount traded on it with a close gap between back and lay odds along with only specific favourite scorelines allowed.No reasoning as to why the favourite scoreline you are laying won’t happen.

All systems need an edge when making selections, some systems have a flawed edge and fail over time, Magic Soccer Bot seemed to have no edge at all so in case I was missing something I emailed Michael for him to check my settings. He replied saying Steve would be better suited to doing that and copied me into an email to Steve asking him to get in touch with me. That was on 7th March and I’m still waiting. Is this due to a sudden collapse of the results? Who knows.

I always like to give things a decent amount of time to prove themselves as even the best systems and strategies can have poor periods but sometimes something just seems wrong and gives the type of performance that could never be recommended by this site regardless of how long it’s given or any recovery it may make. I’m afraid Magic Soccer Bot looks like it comes into that category.

Magic Soccer Bot lives or dies by it’s recovery strategy as that is really the only thing it’s built on. Unfortunately the combination of a flawed recovery method alongside an almost meaningless bet selection process adds up to a failure in my eyes.

Yes it will be profitable at times, almost anything has good runs, and that may go on for a while due to the way the recovery method is employed, but there’s no doubt in my mind that it won’t last and that the results I have had over the last 5 week period prove that.

If you would like to read more about Magic Soccer Bot you can do so here.

Hi Everyone, Keith here again with the start of a new review, this time it’s Magic Soccer Bot.

Magic Soccer Bot is the latest in a number of systems/automated bots from Steve and Michael at ‘winningmore’ and has P/L figures on their website dating back to 15th July 2017 so just over 6 months.

So what does it actually do?

Magic Soccer Bot places lay bets on the favourite score in the pre kick off Correct Score market at Betfair using a recovery system if the lay goes against you ( more on this later ).

The software allows you to input certain criteria after which it’s left alone to get on with the job.

3 separate selection/staking strategies are allowed at the same time with each having independent recovery figures.

There are 6 suggested strategies on the web site, 2 are now discontinued and 4 still in use, and we will be using what have been the best 3 of these so far, numbers 2, 4 & 6, and the base stake will be the suggested 10p per bet.

Although the 3 strategies we will be using all use a recovery method I will also be looking at the figures based on a level 10p stake as a comparison.

Setting up the bot if you wish to follow the suggested strategies is pretty straight forward by just copying the settings from the manual. It’s simply a case of turning each strategy on and waiting for bets to be placed. 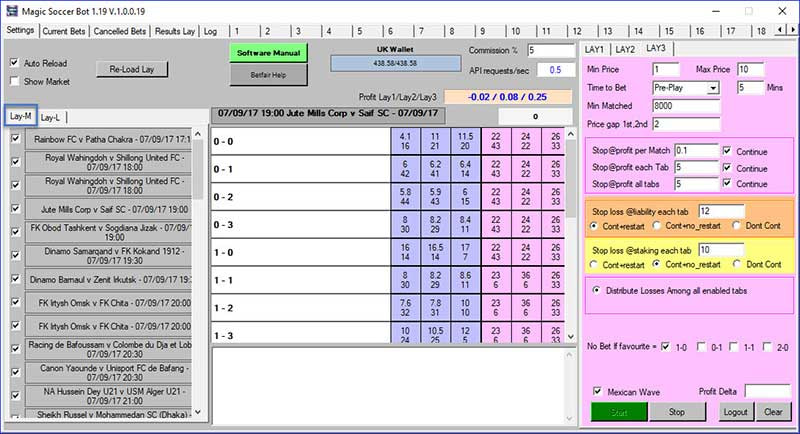 After setting up the bot and reading the manual etc I must admit to a few concerns regarding the recovery methods used. In simple terms it uses a modified Martingale recovery system, the M word always being a worry. The modification is this:

The software has up to 20 tabs for the bets to be placed on, this seems to be done on a first come first served basis so the very first match you bet on will be on Tab 1 and after that bets will get spread out amongst the other tabs ( 10 tabs seems to be the suggested max for the strategies we will be using ). When there is a losing lay the loss is also spread out between these open tabs.

Now of course instead of 100% of the loss being thrown at the next bet in true Martingale style it means that only part of the loss is given to each tab which reduces the liability of each. The down side to this of course is that instead of needing 1 winner to recover with standard Martingale you actually need multiple winners or the stake can spiral out of control although max liability etc are set in the strategy settings.

Remember we are laying what the market determines is the most likely score which will generally have odds around the 7.00 – 9.00 area. The majority of these seem to be 1 – 1 which isn’t surprising if you ever look at football stats. Btw the 1 – 0 score is ruled out as a qualifying bet on all 3 systems.

Whether my concerns will be justified or the modified recovery system works we will have to wait and see.

There are no suggestions of what bank size should be used in the manual or the website so I asked Michael direct and his answer was “for 10p stake, you can keep 100$/GBP for each strategy.” This of course is the equivalent of 1000 points per strategy so for running the 3 strategies together a bank of 3000 points is required. This also suggests that there could be sizeable draw downs if 1000 points is required per system.

The 3 strategies we will be using have shown, according to the official website, a return of 698.2 points over the last 6 months when using the recovery method. The same strategies have shown a return of 207.8 points to level stakes. If those figures were to be continued through the second 6 months then 1396 & 415 points would be achieved respectively.

Given a 12 month license is £120 that means we would need a stake of 8.6p using recovery or 28.9p using level stakes to break even. A stake of £1 per bet, which would require a bank of £3000, would in that case give us a profit of £1276 using recovery or £295 using level stakes. Remember this is from the web site figures and although we have no reason to disbelieve them, they are unverified.

Time now to see if we can replicate the figures on the web site. Check them out for yourself here.

** Please note that the bot was started and the review period started on the 13th Feb but due to illness the intro from myself to Amy is late. The next update will be around 13th March **