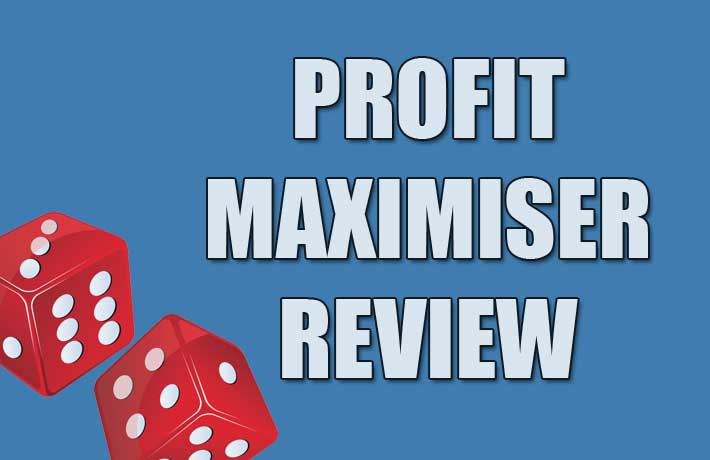 I review a lot of products on my site, and it sometimes does take a lot of patience to keep plodding on, particularly when things don’t go according to plan.

(If you don’t quite follow my drift, try reading through the First Place Winners thread. It’s been woeful).

So it is a great pleasure when I can find a product about which I have no reservations at all.

And glory be, today is one of those days.

Because Mike Cruickshank has released his latest product…

And if you thought Bonus Bagging was good, you really need to take a look at…

Now, it’s going to take me a while to me to review it thoroughly, as I’m gradually working through all the different opportunities that it offers. But in a nutshell, think of it as an entire environment that brings you the best bookmaker, casino and bingo offers in a single place. It’s quite remarkable.

Everything in Profit Maximiser is explained by video. This gives it a  “Monkey See – Monkey Do” appeal that is so reassuring.

You just copy what Mike does and make piles of money!

I’ve actually found myself giggling whilst I’ve been using this product.

Currently I’m concentrating on the bingo offers, something I would never normally consider.

I’m working through a 30 day offer sequence with just one of the many bingo providers, and each day I’m credited with 5 pounds free that I can then enter into an overnight bingo competition.

Sometimes my bingo card wins, and sometimes it doesn’t; but, given that I am playing 5 games a night for 30 days with someone else’s money, I’m almost guaranteed to profit over the course of the month.

And better still, there is no chance at all of losing.

Mike also gives you specific video tips for how to play each game most effectively.

For instance, he shows you how the bingo games can be set up to run offline – meaning, you don’t have to be there to watch them (which is a real blessing for me, as I cannot imagine anything more dull than online bingo).

He also shows you how to navigate the various sites in the most effective way, so that, in this example, the bingo site concerned does not attempt to access my personal funds but instead draws down only from my bonus cash.

Again, all of this is explained in a very simple fashion by the use of video.

I can’t think of a bad thing to say about Profit Maximiser.

I think it’s right up there with Bonus Bagging; in fact, it might be even better.

One thing is for sure: if you loved Bonus Bagging, you are going to adore this.

And yes, before you ask, there’s no reason why you wouldn’t have both. 🙂

The two products do not overlap, but present different, complementary offers and services.

I will take my time with PM, as I plan to progress very carefully, in order to squeeze out every last drop of value.

In the meantime, I advise you to get involved, and see no reason not to recommend it at once.

Profit Maximiser normally costs £147+VAT for a year’s access, but there’s a discount of £50 available, to bring your initial outlay down to £97+VAT.

You also have 30 days to change your mind if you decide it’s not for you, as it’s backed by a robust Clickbank guarantee.

You can get Profit Maximiser here… 🙂

There is one question I’m constantly asked about Profit Maximiser…

– “Is It Bonus Bagging In Disguise?”

In practice, it bears little real resemblance to its older brother.

Now, obviously, at a superficial level, there are clear similarities. But I think the differences are worth exploring, as they will give you a better idea of why PM can be considered a more advanced product.

Firstly, Profit Maximiser is a lot slicker and more ‘modern’ than Bonus Bagging.

For instance, Mike has added two new bonus bagging offers into Profit Maximiser in the last four days, at bookies that aren’t covered by BB.

Now although this probably sounds like an overlap, or ‘more of the same’, it isn’t.  On the contrary, it highlights one of the big differences between the two.

Because the specific processes for extracting the new bonuses are explained, step by step, in video.

The original Bonus Bagging product took you through a generic method, and then pretty much left you to adapt it to each bookie’s (slightly different) site.

Which was fine of course — Bonus Bagging only costs £27 + VAT after all, and returned that investment many times over – but its methods now seem a little dated.

Whereas Profit Maximiser is all about video.

It still seems a little amazing to be able to watch and copy such straightforward demonstrations of how to extract money from these huge gaming and bookmaking companies.

Secondly, Profit Maximiser is ‘alive’! – benefitting from the ideas of its members via a Facebook forum.

No matter how good Mike Cruickshank’s customer service may be, his time is necessarily limited. There is, of course, only one of him.

However, PM exploits social media in a way that Bonus Bagging never did, to create a far better experience for its members.

Subscribers are actively encouraged to flag up opportunities in the forum for each other’s benefit: and this is what they are doing, in a mutually beneficial way.

Some of the offers they find can be quite short-lived, so they would probably be too transient for inclusion within a service like Bonus Bagging.

But they are easy enough to exploit via a Facebook forum, with automated trigger messages highlighting when someone has something new and interesting to say.

Better still, occasionally a reader will spot something really special… in which case, Mike himself gets involved.

A good example of this occurred recently when a reader realised how slow a particular bookie was (and indeed still is!) when it came to updating its prices in a particular market (I can’t be too explicit without giving the game away).

Mike realised this was no flash in the pan, and has since produced a complete new video, showing how to exploit this bookie’s unintended generosity without incurring any risk.

He would however have been unable to do this without the contribution made by a very observant forum member!

The older product is really rather repetitive.

Now, there’s nothing wrong with that of course! Particularly as it’s helped a lot of people make quite a bit of money.

But ultimately, you can only get so far with Bonus Bagging.   It’s designed as a ‘one trick pony’.

In contrast, Profit Maximiser is much more versatile and interesting.  And some of the outcomes can be completely unexpected!

Only this weekend for instance, I managed to make almost £60 from a gaming offer, because I was lucky with the way the numbers fell.

I actually made the mistake of not setting the staking level to the minimum amount, per Mike’s instructions, which had the fortunate side-effect of multiplying my winnings!

Now before you conclude that my good fortune proves nothing, realise this:

The worst case scenario, even with my error, would have been a break-even outcome, whereby my initial deposit would have been refunded in full under the terms of the offer.

And so it goes.  You win some, you draw some, with Profit Maximiser.   🙂

With of course the real point being – I haven’t lost one yet!

I am conscious of the fact I am starting to sound like Mike Cruickshank’s personal cheerleader.

So please read my comments within the context of my whole site.

I have tested some poor services here at Lay Back And Get Rich, so it’s naturally refreshing to be able to recommend a couple of products without reservation.

The sales pitch may be hyped… but the bottom line is profit.

All that said, I suppose the ultimate challenge to Profit Maximiser must be whether you should buy it instead of Bonus Bagging.

And the answer has to be a resounding No.

They do different things, and one is a natural forerunner to the other.

The ideal approach would therefore be to buy Bonus Bagging first, then keep some of your profits back, in order to invest in Profit Maximiser!