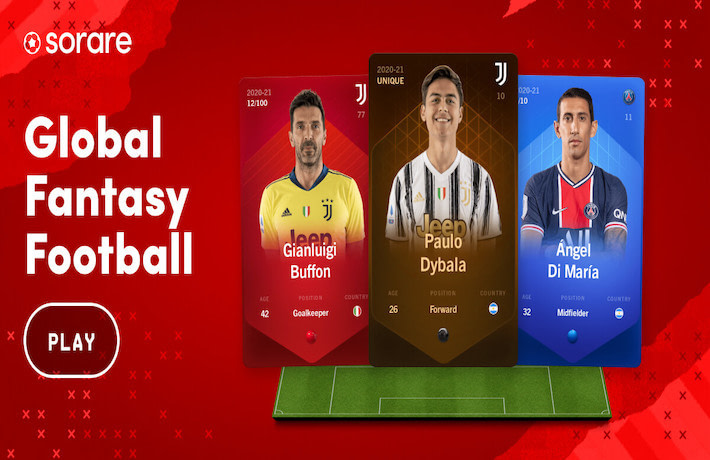 I have dabbled with fantasy football and have had some successful punts with cryptocurrency investments in the past, so this service grabbed my attention.

Introducing a platform called Sorare, a fantasy football game that combines these two worlds. The idea is to collect football player cards and then use them to compete in fantasy football tournaments to win prizes each week.

The platform limits the amount of cards available and they are rated Common, Rare, Super Rare and Unique. There has also recently been a new scarcity level added called Limited, as part of the scaling solution for the platform.

Sorare operates using the Ethereum blockchain and the cards are "Non Fungible Tokens", meaning that they are digital assets that are unique and can be tracked and traced.

I held off signing up for a while as I wasn't sure what it was all about, however, after spending hours researching, I decided to take the plunge!

I signed up through a referral link as this way I would get a free card after obtaining my first five cards. I will go into more detail on my strategy later, but first, read on for a bit more information about Sorare.

Click Here to Open a Free Sorare Account
Table of Contents
Latest Upgrades to the Sorare Platform
How much does it cost to get started on Sorare?
How to make a profit using Sorare
Buying cards on Sorare
Free limited card
My strategy for Sorare
Results and Summary

I had been a little worried after the whole Football Index saga, but Sorare is different to Football Index, in that you actually own the cards, they are traceable and there is a verified marketplace.

The platform have recently raised $50M in Serie A funding and they have joined the ranks of Twitter, Instagram and Spotify as part of Benchmark's investment portfolio.

Ubisoft have recently teamed up with Sorare to launch their One-shot League, a free to play fantasy football game based on the Jupiler Pro League using Sorare cards.

Latest Upgrades to the Sorare Platform

This is part of the platform's scaling solution and an effort to make it more accessible for new players to get involved.

With the new Limited cards comes Division 5, a new tier across the tournaments that are currently exclusively available for these cards only.

Rules and rewards for the Division 4 are to stay the same for the time being.

This is an exciting development for the platform and there are more upgrades to come soon!

How much does it cost to get started on Sorare?

Realistically, if you want to compete for prizes and make money on Sorare, you will need to purchase either five limited or four rare cards at least.

This is the bare minimum to be able to enter the main competition that takes place each week, Global All Star Division, which have various card requirements for each tier.

It's possible to get hold of these cards with a budget of £500 and then once you have made your initial investment back, any prizes will convert into pure profit.

How to make a profit using Sorare

I touched a little bit on making money from Sorare by entering the competitions, but here I will go into more detail on how to win cards and Ethereum on the platform.

When you first sign up, you can enter Starter League Rookie tournaments for the first eight weeks to build up your collection and get used to the site.

To enter a tournament you need to put together a team of 5 players, a goalkeeper, defender, midfielder, forward and then an extra player that can be any position.

You will receive some free common cards to use when you sign up and go through the tutorial steps, so you can use these for the rookie tournaments.

You can win higher value cards from the rookie tournaments, but you need to finish in the top 3 places for this, which is going to be pretty hard going.

The Global All Star tournaments are where the fun really begins!

There are several tiers of the Global All Star Division, but I will use Tier 4 as an example. For this, you just need to get a minimum of 205 points to win a cash prize.

This isn't too difficult a target as long as you prepare well and make sure your players are likely to feature in their games that week.

Here is an example of the Division 4 prize pool, taken from the upcoming tournament this week:

So as you can see, if you can consistently get over 205 points, then you can soon get your investment back.

There are also other tournaments such as Global U23, Champion Europe, Champion Asia, etc. that you can enter, as long as your players fit the criteria.

Another way is to simply buy and sell cards. Buy them cheap at the auctions and sell them on the transfer market to other managers at a higher price.

The player cards can be listed in various currencies such as GBP and EUR or as ETH (Ethereum), so there are number of ways to leverage their value.

For example, if ETH goes up in value then your portfolio will rise in value. If the value of ETH drops, your cards could still go up in value and make you a profit.

Before you purchase any cards on Sorare, it's a good idea to have a basic strategy in place so that you have the best chance of success.

It's not a good idea to just start buying cards without doing any research first. You could end up with players that may have a long-term injury or aren't being picked for first team football for another reason, leaving the card useless to you for upcoming competitions.

Your main aim to begin with is to obtain a minimum of four rare cards so that you can enter the Global All Star Division Tier 4 tournaments, or five limited cards for the Tier 5 tournaments.

Although you can enter with player cards from leagues around the world in this competition, it's best to focus on specific regions, such as Europe or Asia, so that you can look to enter regional tournaments too.

There are several types of tournament that you can enter:

For Tier 4 tournaments, the cheapest option is to use a "common" Goalkeeper card. Goalkeeper cards are a little harder to come by and therefore cost more, so if you're eager to get started, you can just use a common card for now.

There are two ways to buy cards, either through the New Signings section which take place by auction, or you can purchase cards directly from other managers.

The main thing is to take time to research players before buying any cards to make sure that they don't have too many DNPs (Did Not Play) in their recent match history.

You can see their average score and whether they played or not in the last 5 games by clicking on the card in the market.

The best way to get started with Sorare is to make a free account and go through the introduction steps where you will earn a free collection of common cards.After that, you will need to purchase 5 cards at the New Signings auction. If you use my link, you will get a free limited card at this stage.The free card could be worth anything from £50 to thousands and beyond. Exciting stuff!Once you have got hold of some non-common cards, you can enter more tournaments to win bigger prizes and that's where the real fun begins.If you've got interest in cryptocurrency, fantasy football or trading cards, Sorare is certainly worth a look and it's free to get started.
Purchase 5 Cards and Get 1 Limited Card Free Here

My strategy for Sorare

I decided to focus on Asian league players to build my team so that I'd be able to enter the Asia tournaments as well as the Global All Star League tournaments.

The first step I took was to look at the New Signings page and find my way around a bit. I selected some filters, such as players aged 30 or under and chose the K1 League and J1 League, then adjusted the price slider to remove high priced cards.

An important factor was to make sure that the players were "Starters", which meant they were first team players and would hopefully be starting matches more often than not.

Once I was satisfied the players would perform well enough in my teams, my strategy was to wait right until the end of the auction and place a cheeky bid.

I didn't jump in and buy all 5 cards at once, in fact, it took me a couple of weeks to form my team and even then, I was still missing a Goalkeeper. That's ok though, as I would be using a Common Goalkeeper card for the time being.

I made a rookie mistake and bought 2 cards from the Manager Transfer Market, which meant they wouldn't count towards my free card. I also accidently bought the same player twice!

This was because there wasn't any kind of confirmation, so I had thought the purchase hadn't gone through. It seems that it just takes a few minutes sometimes so you need to wait. You live and learn, right!?

I decided to hang on to the cards bought in error anyway and see if I could sell them at a higher price in the future. I could also still use them to enter tournaments too in the meantime.

My collection of 7 rare cards cost me £680.33 in total and I also had a free rare card, which ended up being worth approximately 0.043 ETH, so that was a nice bonus.

I entered them in the Global All Star tournaments each week with hope of being able to achieve at least the lowest prize as often as possible.

Based on the ETH price at the time, I could win around £18 each week for the bottom prize, which would mean I could make my investment back in 38 weeks. Hitting the next prize up a few times would knock that time down even more.

As it happened, I had managed to achieve the bottom prize fairly consistently and I was well on the way to recovering my initial investment. This was great news, as anything from there on was pure profit!

The platform had also made some upgrades that meant there would be no GAS fees when transferring ETH , so that was even better.

Aside from winning prizes, the other way to make money on Sorare involves buying cards and selling them at a higher price.

I had managed to get a bargain with my most recent purchase, winning the auction at just under £50 less than the price it had been selling for the last 3 days.

The average price the card sold for in the past month was £140 higher than what I bought it for, so it may be that I would simply sell it on in the near future and bank the profit.

I've found Sorare really fun to use and it seems an easy way to make money, as long as you are careful with the player cards that you choose.

It is a great way to put your football knowledge to use and make a profit. Even if you're not all that clued up on all the latest players (like me!), you can still make a success of it with a little bit of research.

The platform has already grown a fair bit since I joined up and many more leagues have been added. I can't wait to see how it progresses from here.

Sorare gets my approval!